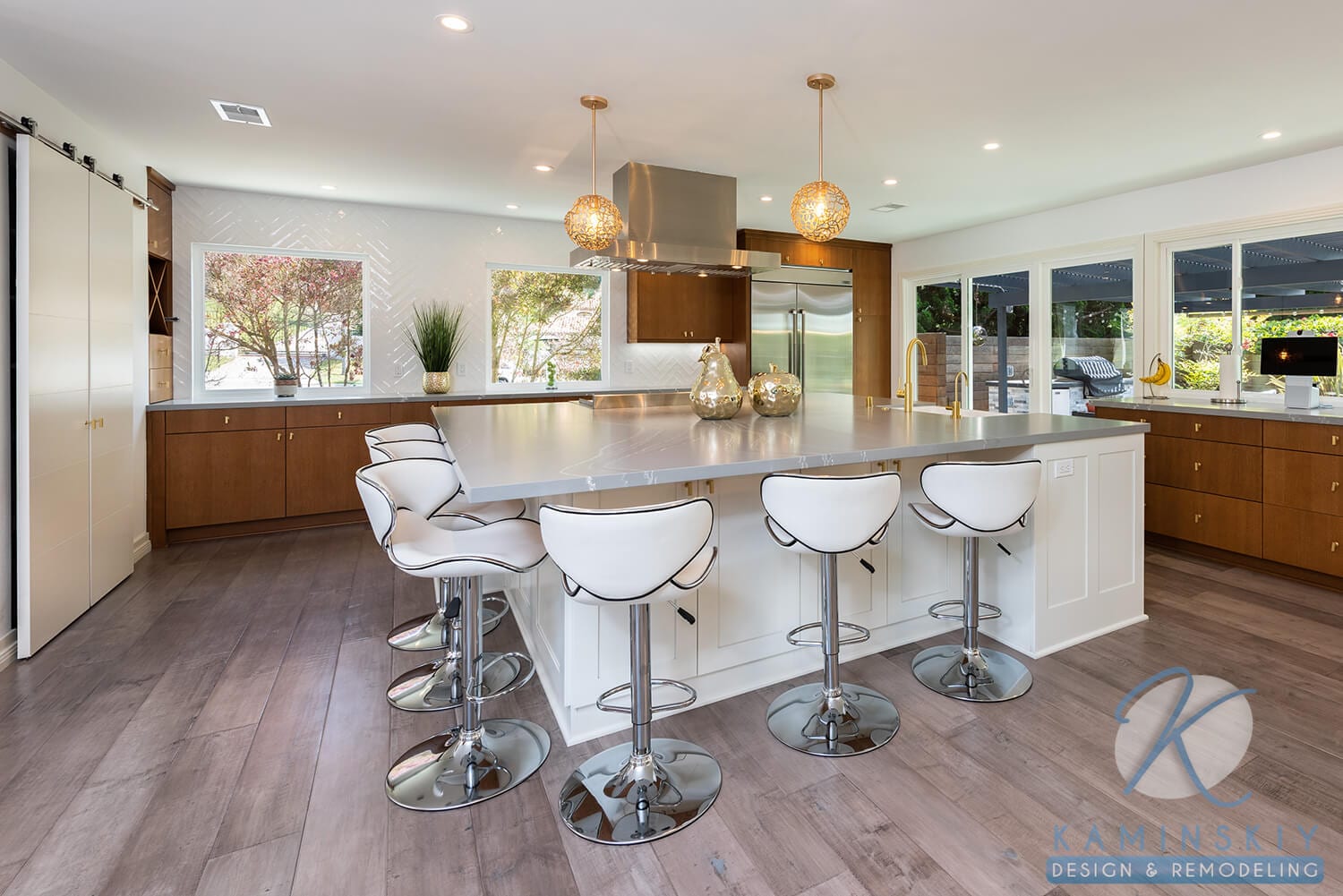 An island adds value to your kitchen and your home as well as improving the function and liveliness of your kitchen. It can be as simple as an extra counter right where you need one, or it can take on the heaviest work in the kitchen with an island-mounted range and prep sink.

The island can become the heart of a kitchen. It’s a place to cook together, where guests can hang out without feeling like they’re in the way.

It’s easy to see why this practical and visually pleasing addition has become a staple of the modern kitchen and one of the most requested upgrades for kitchen remodels.

According to This Old House, the kitchen island as we know it became popular in the mid 20th century. Although separate work tables could be found in kitchens in the 19th century and as far back as colonial America, it wasn’t until the 1950s that islands really caught on.

The popularity of Islands grew as kitchens began to take up a more central place in a house and became a place for family and guests to hang out. The evolution of the mid-century kitchen was influenced at least in part by Frank Llyod Wright’s open living spaces.

By the 1960s, more upscale designer kitchens began to incorporate islands with prep sinks, cooktops, and built-in appliances. Though these design features were not widely available at the time, they would foreshadow the current trend of the working island.

Another big name to influence the popularity of islands was Julia Child. As America watched her prepare meals from her televised kitchen island, they began to see cooking as a hobby and an art form rather than just a chore. As the kitchen became more of a living space,  the popularity of functional islands grew.

An island can be the perfect accent piece to a kitchen. Its central location draws the eye and can visually tie together the entire space. There’s no need for the island to match the surrounding countertops and cabinets. A contrasting or complimentary design cleanses the visual pallet and makes it easier to appreciate the unique design touches of both the island and the kitchen around it. Like a rock in a Zen garden, an island can be a striking yet simple use of negative space.

An island can contrast in color, texture, and materials.

An island is a vital part of any serious working kitchen. Just having an additional prep surface can be helpful, but a true working island can handle most cooking tasks in one place.

Islands can include ranges, ovens, vents, dishwashers, mini fridges and more. By marooning some of the major kitchen hardware on the island, you create additional space on the “mainland” for a bigger sink or additional cooking surfaces.

An island with a stovetop allows you to face your guests while you cook.

One of the most appealing things about an island is the way it makes cooking more social. By adding barstools, you invite your family and guests to sit and snack or sip while you cook. They might even be inspired to help out!

The island counter-top is an ideal place for a quick meal and easy clean-up. The bar counter can be set up on a higher level above the rest of the island creating two levels for two different purposes.

You can incorporate even more visual variety with bright or contrasting barstools.

ISLANDS IN APARTMENTS AND SMALL KITCHENS

Assuming the island isn’t too big for the kitchen around it, you’ll find that an island makes your kitchen bigger by increasing the counter space and storage space. An island makes cooking in a small kitchen easier by allowing you to separate your work surfaces.

A small kitchen island is the perfect place to tuck away your trash and recycling bins, large appliances that don’t get much use, and other odds and ends that eat up precious space in a small kitchen.

Just like real islands, kitchen islands come in many sizes. However, there are a few rules of thumb to help you determine the ideal height and dimensions of your island.

The size of an island depends on its intended use. A working island needs more space to accommodate a sink and or a stovetop. An island with multiple purposes, like a dining counter and a prep station, will need a buffer between these spaces.

The height of an island also depends on what it’s being used for. The standard height for an island is 36”, but bakers might want a portion of the island built to 30” to allow more leverage for kneading and rolling.

42” is the height for a bar top with high stools. By making the bar higher, less counter clearance is required because people’s knees bend less when sitting on high stools.

DISTANCE FROM OTHER COUNTERS

There needs to be enough spaces between the island and the “mainland” counters to allow free movement through your kitchen while someone is working at the island. At the same time, it should be close enough to the other workspaces like the fridge and the oven. Setting up an island in relation to the most used parts of the kitchen makes the most of the space and prevents traffic jams.

Generally, an island requires 42” of clearance between the edge of the counter and the wall or other counters. A dining surface needs 60” of clearance.

Just like kitchens themselves, islands vary widely in price depending on their design, features, materials.

As an investment in your kitchen and your home, you can’t go wrong adding an island.

Basic, small, built-in islands start around $600 without any cabinetry, plumbing, or electricity. Working islands with sinks and storage start at around $6,000.

Islands are a highly sought-after feature, making your kitchen attractive to potential buyers and boosting your home’s value. The experts at HGTV have found that homes with a kitchen island are the easiest to sell.

You can expect a return of ranging from 60-80% on an island.